On the first day of my MBA (Marine Biological Association) work experience week at the Citadel Laboratory in Plymouth, we were taken down to a part of the Plymouth coastline called Batten Bay, a long shingle beach carpeted with a thick layer of brown buoyant seaweed. We headed out at low tide, when all of the large slate rock formations on the beach were open to the air, in search of a foreign species of oyster, called Crassostrea Gigas, or the Pacific Oyster. They grow around the rocky outcrops, and have in recent years been choking out the population of native European Flat Oyster.

The Pacific Oyster is far larger than our native species, with short, sharp frills around the edges and a grey to pale-white colouration; it has a long oval shape that is distinct from the rounder European Flat. The species first came from estuarial areas of South East Asia and Japan, and was first brought into Europe because of its ability to grow to large sizes much faster than most types. It was believed that the waters around Britain would be too cold for them to successfully propagate, although they would be able to grow large enough for consumption. However, they soon adapted and started to take over areas of coast, which has made some ecologists concerned about the impact they are having on the European Flat. Pacific Oysters, like many other oyster species have sequential hermaphroditism, the ability to change their gender at will, in this case on a basis of food abundance. In times of plenty, the oysters become primarily female, in order to allow for a large number of eggs to be spawned so that the young can take advantage of the abundant food, while in times of famine, the oysters become mainly males so that the next generation will be smaller and thus use less of the limited food supply. Larval oysters are microscopic free swimmers, and will search for a new suitable area before permanently attaching themselves to that part of the rock. 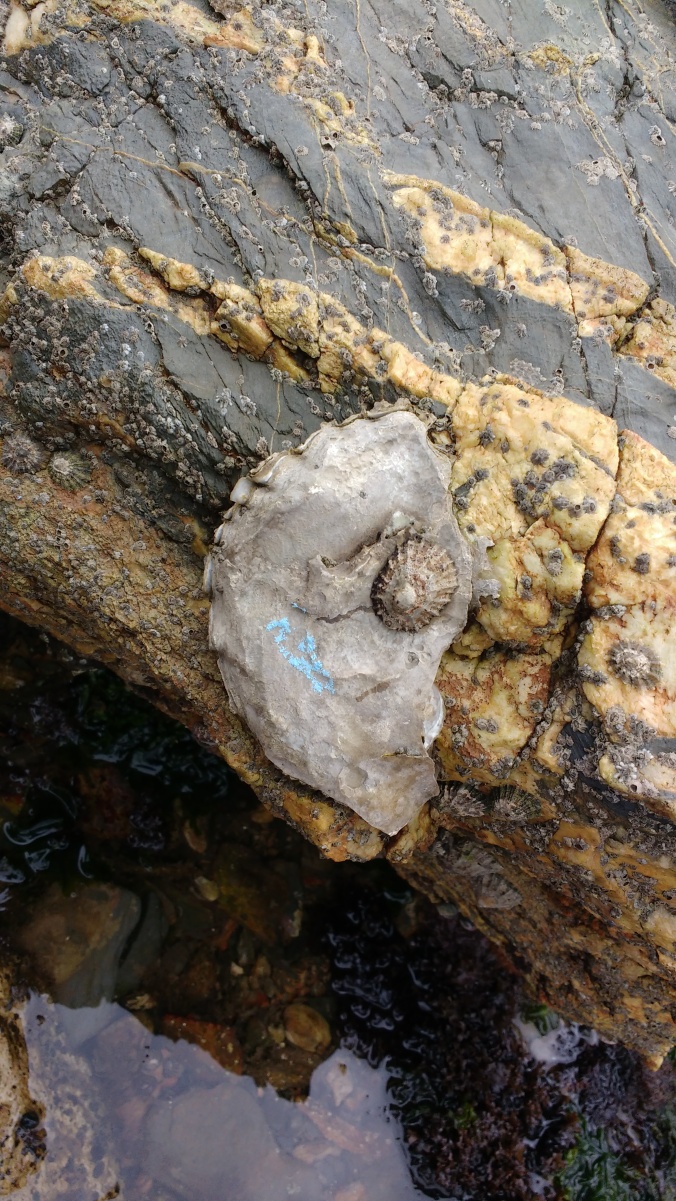 We separated into two groups, one taking the east side of the beach, and the other on the west side. With rulers and chalk in hand, we scanned the rocks searching for white oyster shells nestled in the rocks, noting down each one we found along with its length. Pictured above is the largest oyster that we found, 123mm long. I named him Ozzie. While Ozzie may be the largest we found that day, the Pacific Oyster can reach 400mm at the absolute most, but most are eaten before they survive that long. By measuring the length of the oysters, we hoped to check on how previous generations were faring, identifying cohorts (groups of oysters that attached to the rock at the same time) by their similar sizes. In addition we would see the success of the new generation, and be able to compare this to previous years, checking if the oysters are on the rise, and if older cohorts are surviving.

The survey was extremely fun, running about the coast and marking out oysters with the help of our extremely knowledgeable professional, Jack Sewell, who knew just about everything there was to know about the coastal ecology of Batten Bay. I look forward to comparing the data we gathered with that of previous years, and seeing how successful these foreign oysters really are.