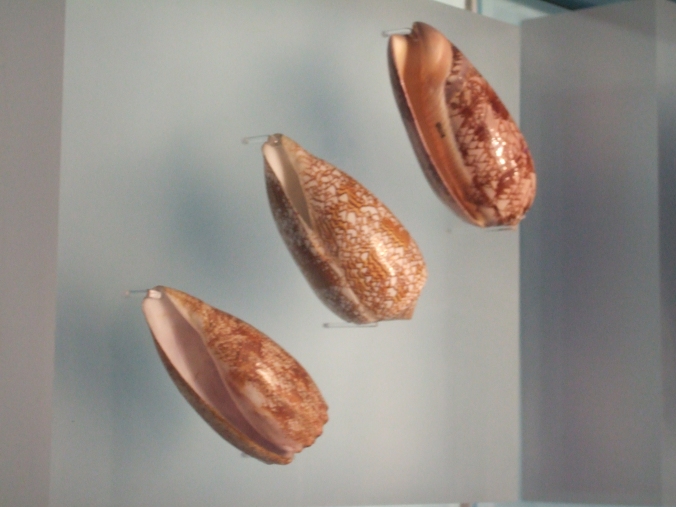 This unusual coral is a Ctenactis Echinata, a species of mushroom coral, so named due to their similarity to the cap of a mushroom and I saw it at the Secret Cities of the Sea exhibition. Most mushroom corals are free-living rather than colonial and sit by themselves in crevasses and on the edge of kelp forests. Many mushroom corals also looked bleached due to a lack of zooxanthelles, symbiotic algae, in their bodies which is unusual for a coral and as such many people mistake them for dead. Luckily, unlike the coral reefs we are used too, bleaching in many species of mushroom coral is perfectly healthy.

The specimen above is particularly round in shape, ctenactis echinata normally being more of an oval pattern around 20-30cm long and roughly half that in width. Like most mushroom coral, this coral has a single mouth opening on the top of its body, through which polyps will emerge at night in order to feed. The edged plates that make up the radius of the coral are sharply edged with tiny teeth, that can badly cut attackers although, other than specialised coral eaters, this species doesn’t have much to fear except from attacks by other coral. This species does not appear bleached, instead having a dark brown colour while alive, that makes it look similar to the rocks it nestles amongst.

The Ctenactis Echinata can both reproduce with the use of spawning, in which all corals simultaneously release eggs and sperm into water, or by sprouting off smaller versions of itself to create genetically identical clone corals. Asexual reproduction like this is often done when the current coral is to badly injured to continue living for long, and such a measure is required to ensure the corals genes continue to exist. Fortunately for the coral, its genetics do not seem under threat, being rated as one of the least concerning species in terms of its rarity. This is perhaps due both to its enormous distribution, across most of the Pacific from China to the Red Sea to Australia, and the lengths to which it will go in order to survive.

It is almost impossible to go diving in the Pacific ocean without coming across on of these corals or one of its mushroom coral cousins. If I am able to pursue diving in those areas I’m sure I will see it. 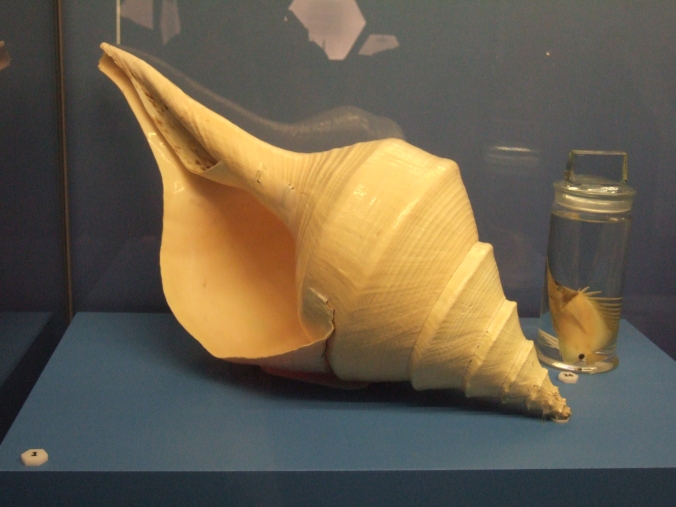 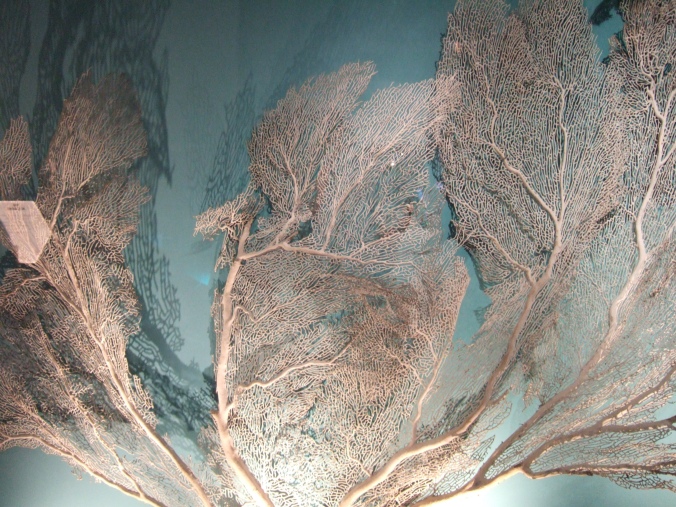 In the Secret Cities of the Sea exhibition at the Natural History Museum in London, which I discovered while listening to an Inside Science program, there were various displays about the inhabitants of the reefs. One such example was this stunningly preserved sea fan. The sea fan is a type of coral that grows out of the continental shelves at the edge of tropical and subtropical reefs. They build out into large fan-like structures that help them to catch plankton and other tiny organisms that are brought up from the deep waters of the Twilight Zone by strong currents. These same currents are what feed the reef and keep a large supply of nutrients available to the creatures that live there, and the sea fan is simply seating itself closer to the source.

Like other corals, often contain zooxanthellae, tiny algae that are allows to grow inside and around the coral giving them protection in return for photosynthesising for the coral. This symbiotic relationship is essential for keeping reefs alive, since most reefs are fairly near the surface. These algae are also what give the coral its colour, which is why coral bleaching occurs when a reef is sick, since the stress of illness makes the coral jettison its cargo of zooxanthellae. With changes in acidity and temperature in coral reefs across the globe (mainly due to what humans are doing to the ocean) more and more reefs are beginning to bleach and turn white, which will eventually kill them. Some sea fans, that live deeper down in the shelf wall do not have zooxanthellae, since it is no longer beneficial due to the lack of light, and so they must rely entirely on capturing enough plankton to eat.

Many species live in the winding mazes that sea fans create, jutting out of the shelf walls, including starfish, kinds of pipefish, and colonies of bryozoan, which are actually several zooids living together. Bargibant’s Pygmy Seahorse and Denise’s Pygmy Seahorse are two species of the tiny pygmy seahorse that live especially on sea fans and their relatives. They are perfectly camouflaged to the coral, coloured and with bumps and knobs in lighter colours over them. Large groups of these seahorses can be found over a sea fan, where they eat the plankton that filter through from the deeps. The Bargibant’s Seahorse will likely never leave the coral that they were born on, leading to large families of seahorses living in the same place for generations.

These sea fans are extremely interesting, now being looked into by the medical industry for the chemicals they produce, and I am glad that I saw them here at the museum.

An Inside Science podcast I listened to today really caught my attention, as it contained a number of interesting topics that I hold close to my heart. The talk about invasive species, such as New Zealand Pygmyweed that I often see in ponds, interested me, since I had never thought about the benefits of introduced species that we label with the term ‘invasive’. I am extremely interested in the preservation of coral reefs, as they are such diverse areas of life. I will definitely visit the new exhibition at the Natural History Museum in London, and recommend that others do the same. The evolution of the brain has been something that I have had some confusion about for quite a while, and these new insights into our most valuable organ has got me thinking about how different forms of life may use different ways of controlling their bodies, outside of communication. You can listen to the program here, and book tickets to the Secret Cities of the Sea exhibition here. To see my experience at this exhibit, click here.