Having spent a day surveying oysters on my MBA work experience week, my group and I went out to the Plymouth coast to look at some of the more charismatic denizens of the ocean. Where the estuary mouth meets the south coast, there is a remarkable selection of both freshwater and saltwater aquatic life living in the shallow bracken beaches. These areas are devoid of larger predators that would happily eat smaller marine life, and so make fantastic nursery grounds for young fish and crustaceans hiding in the sand. Taking our push and sweep nets in hand, we waded into the crystal waters to stir up fish life living under the surface.

We used two kinds of net to scour the estuary bed, large push nets which stirred up the sediment and captured the creatures that were revealed and smaller, finer sweep nets which could be used the capture smaller fish in clumps of seaweed or small rock formations. Spreading out and searching, we found a wide selection of flatfish in the knee deep water, as well as a wide selection of crabs, shrimp, sand eels, and, much to our delight, a large pipefish from among the short greenery. The flatfish were identified as a variety of young flounder and plaice, which look extremely similar apart from the small sharp spikes that can be felt on the sides of the flounder, setting it apart from the smooth plaice. We placed the animals into little trays while we collected, much like when I went pond thrashing with Matthew Smith, then chased the slippery customers about with our hands, trying to hold the still for measurements. The lesser pipefish, with it’s winding serpentine body and long nose was an immediate favourite – our catch of the day. 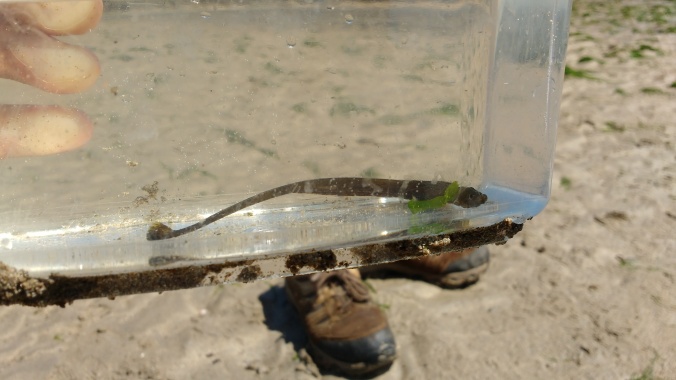 We then moved onto the ocean itself, stretching out for mile upon mile of open blue. Ordinary nets would be of little use here, we’d be up to our necks in water before we saw anything, and so we brought out a huge weighted net. Three of the group brought the net out into the ocean, while the rest of us kept the net on the sea floor and near the shore, creating a semicircle of water, from which no fish could hope to escape from. Dragging the net in, we scrambled to seize the myriad of flatfish, such as flounder, turbot, plaice and brill, sandsmelts, baby sand eels and gobi.

It was a brilliant time out on the beach, and I learnt a huge amount about the fish species living around Plymouth. I feel sorry for all of the people on the beach building sandcastles and taking in the sun, instead of having such a good time with the marine life all around them.

On my day as a helper at the London Aquarium, one of the interesting activities I participated in was feeding the ray pools, which are the open pools near the start of the aquarium containing all manner of flatfish, crabs and rays. Taking a delectable tray of calamari, raw fish, freeze dried prawns and other seafood goodies, the staff, Monica (my guide for the day), and I went about the pools making sure all of the animals were fed. Under the direction of the staff I selected the correct creatures and gave them food with the use of a long stick and some well timed throws.

Above I am feeding the juvenile tank, where the adolescent rays are kept after they are old enough to come out of the private tanks in the back of the aquarium. There are a selection of Undulated and Thornback Rays in the ray pools, and we used smaller pieces of fish and squid for these younger ones. In the wild they would act the same way any adult ray did, but for the sake of safety the aquarium places them separate to the larger crabs of the adult pool. The more confident rays came to the surface to receive their food, and would often snatch food away from the shyer animals, meaning I had to make sure those rays got food while the others weren’t looking. It was difficult to time, since they did not always eat the food immediately, but between myself and the staff, every ray got some food.

In the larger ray pool, there were some animals other than rays to feed, such as the aptly named Herbert, who was a Turbot, and a large slow moving Edible Crab. Turbots camouflage is perfect for the sandy sea bed, a mixture of pale yellows and white, only identifiable by the twin eyes poking out from under the sand. Flatfishes eyes start on different sides of their heads when they are born, but as they develop, the eye on the bottom side rise through the head to the other side, since they do not see on the face down side. The crab was slow to move, and I had to dangle the squid and prawns in front of his face before he would try to eat them. Fighting back other hungry rays, I would hold it in front of him, waiting for his soporific claw to close around the food.

It was incredible fun to feed these animals, and I was amazed to be working so closely with such  incredible creatures. I hope to work with animals like this again in the future, and recommend it utterly to all who are considering such opportunities.