While surveying the Pacific Oyster population on Batten Bay, Jack lifted several smaller rocks that littered the coastline, giving us a glimpse of the wildlife that was hiding under the seaweed forests that covered the lower shore. At first glance, most animals on the rocky landscape seemed stationary and with little diversity. Limpets and oysters dominated the rocky areas and on the sandy beaches tiny common crabs scuttled, giving the only sign of movement. The Plymouth coastline, however, is one of the most diverse habitats in Britain. Hidden beneath the sand, there is a wide range of snails, tiny nudibranchs, sea spiders and most noticeably, this creature: 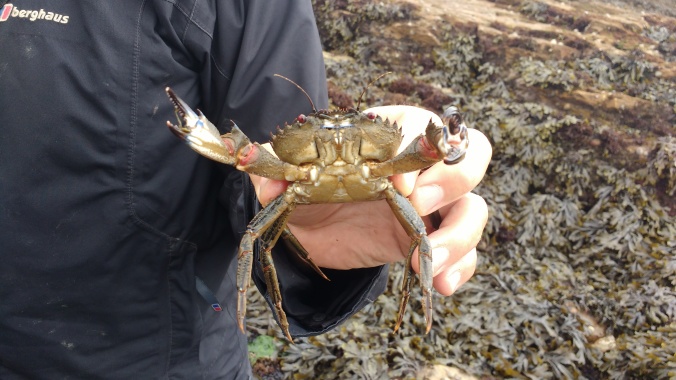 The Velvet Swimming Crab is one of the largest crabs that can be found on the British coast, preferring areas of sheltered shore, such as the crannies of the large slate formations across Batten Bay. Commonly found across Europe in the North Atlantic and Mediterranean, easily identifiable by the blue and red stripes around the eyes and carapace, and the tiny hairs across the back that give it the ‘velvet’ part of its name. It’s paddle like back legs allow it to swim in high tides, rather than being forced to scuttle on the sea floor. Extremely aggressive for a crab of its size, it is little wonder that these crabs are sometimes called Devil Crabs, and even as I held it firmly from the back, I could feel it trying to turn and assault my fingers. This is an example of some of the larger creatures that make up the Plymouth aquaculture, but there are many other species hiding under rocks, just out off sight.