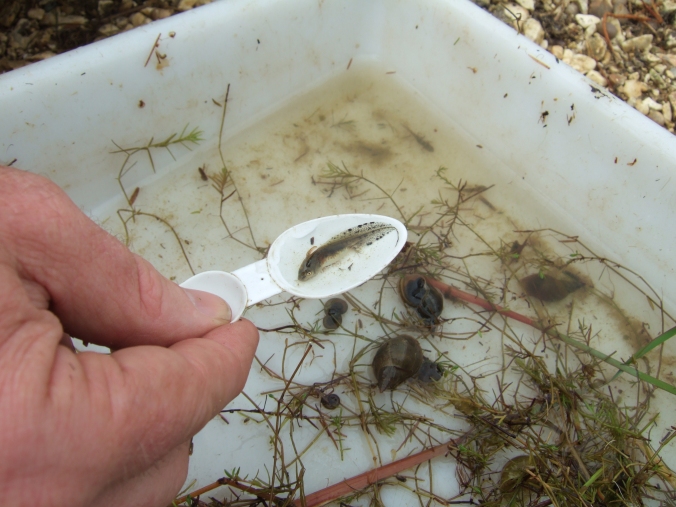 While thrashing an amphibian infested pond with Matt on my work experience, we found a large colony of rare great crested newts living by a bank of water mint. Of the three species of newt that live in Britain, the others being the Common and Palmate Newts, the Great Crested Newt is be far the largest and the rarest, measuring at around 15cm long, over 5cm longer than other British newts. The GC Newt, or Triturus Cristatus, can be recognised by the dark blotches on it’s body, which are unique to each individual, and the yellow or orange underbelly. Males also possess a silver or grey stripe that runs down their sides. During mating season, males will develop a large jagged crest, leading from the base of their head to the start of their tail, and a smoother crest along the whole of their tail. This crest is used to attract females to mate with.

Great Crested Newts mate during February and early March, and lay a couple of eggs every day from March to June, until roughly 250 eggs are produced. Eggs are normally placed on the leaves and branches of aquatic plants, such as the water mint in the pond Matt and I thrashed, and wrap the gently so as to protect them. The eggs hatch after about three weeks, creating a new batch of newt poles. The young are vulnerable to larger predators, such as fish or leaches, and so the adult newts normally lay in relatively safe ponds, avoiding rivers or lakes. After four months, the newt poles are able to leave the water and breath air, and after 2 or 3 years, they are ready to breed. A Great Crested Newt will live for about 10-15 years in the wild, but one newt has survived 28 years in captivity before dying.

Throughout Europe and in the UK in particular, the are numerous restrictions on what you can and can’t do with these newts. They are heavily protected, making it illegal to harm, keep, disturb or move one of these newts without the correct licence and the permission of the National or Wildlife Trust. Luckily, Matt and about 2000 others in the UK possess this licence, so we were able to carefully go about our work in the pond without harming the newts.