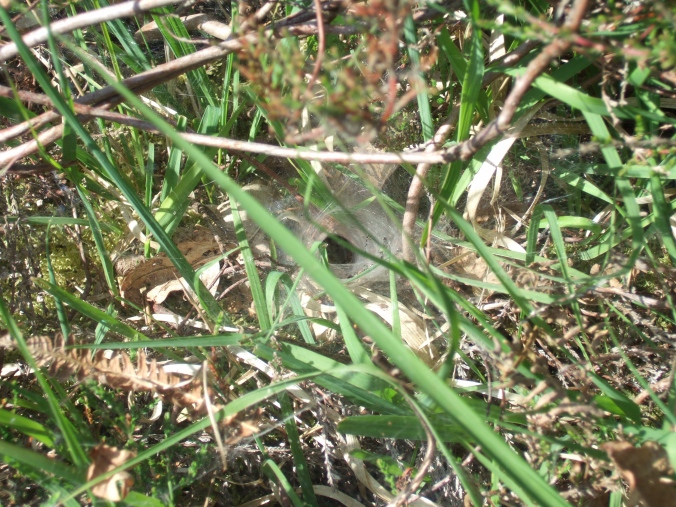 Dotted around Snelsmore Common you can find tubular spider webs, about 2cm in diameter, with wide sheets of spider silk around their entrance. This is not the home of the famous and feared Sydney Funnel-Web Spider, native to Australia, but the web of a Labyrinth Spider, that are common across Central Europe. The Labyrinth Spider, or Agelena Labyrinthica, is a species of funnel-web spider measuring at 10mm in males and 12mm in females with a broad beige cephalothorax, and a dark brown abdomen with a pale band down the middle.

These spiders will wait for prey to stray to close to their maze-like webs and send vibrations through the air as they struggle in the silk threads, alerting the spider to the prey’s presence. The spiders can feel these air vibrations through the use of trichobothria, small hairs on their legs, which are shaken by even the tiniest air movement. They will then exit their web and drag the prey back into their den. Typically, they will feed on small insects, such as grasshoppers and lacewings, since these creatures live in the tall grass they make their webs in. These spiders lay roughly 100 eggs, which are stored in an eggsack at the perimeter of the web, disguised with grass and leaf cover. They young remain in the web through winter, until they are ready to leave.

While the bites of Labyrinth Spider are harmless, their webs look very similar to those of the Cellar Spider, Segestria Florentina, who have a particularly painful bite. These spiders come to Britain on boats from Europe, and make their funnelled webs in cracks in buildings. To tell the difference, the Cellar Spider is black, with a distinctive green shine on the fangs, and will be living in urban, often costal areas. In addition, these spiders have five or six distinct lines leading from their homes, while the Labyrinth Spider has a single sheet. Try to avoid the Cellar Spiders, as their venom contains several painful neurotoxins.

The Labyrinth Spider webs could be found all over Snelsmore, around shin level in the grassy heather, but Matt and I did not see any of the spiders themselves, since we did not have time to wait and watch the webs.