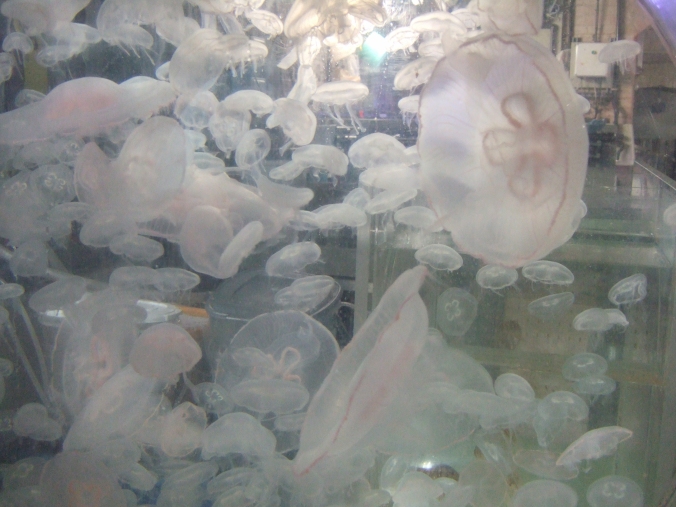 The moon jelly, or Aurelia Aurita, is one of the most widely distributed jellyfish in the world, ranging from equatorial tropics, to more northerly seas around Europe and in the Atlantic. On my ‘Marine Biologist Day’ at the London Aquarium, I saw a tank of young moon jellies being raised until they were ready to go on display in one of the larger Kreisel Tanks. Jellies of the Aurelia genus are very distinctive from other jellyfish, by their large disc shaped bodies, which are roughly 10 – 20 cm in diameter. Unfortunately, it is virtually impossible to identify individual species in the genus without the use of genetic sampling. Like many other species, moon jellies are capable of free swimming, although they often move with the currents which makes them seem as though they are drifting with the current. In reality, most jellyfish swim by undulating their bodies, and one of the only free drifting jellyfish, is not really a jellyfish at all. The Portuguese Man O War is in fact a colony of four separate organisms, working symbiotically as a single siphonophore.

Moon jellies and other jellyfish have no internal systems, such as the nervous, endocrine, respiratory or excretory systems. The transfer of chemicals, oxygen and nutrients throughout the body, as well as the removal of waste products, are dealt with by diffusion, simply allowing the substances to move throughout the thin cell walls of the body, rendering the need for the latter three systems void. Nobody quite understands how the jellyfish is capable of operating without any kind of nervous system, however it is known that jellyfish can detect the direction of current, and respond to it.

Moon jellies normally feed on a diet of plankton, larvae, fish eggs and small molluscs, which they catch with their trailing tentacles and then pull into their stomach. The tentacles contain cnidoblasts, small exploding cells, that deliver the venom to the prey when they burst. Moon jellies are mainly predated by Leatherback Turtles, Sunfish, and various tiny parasites.

I only saw these moon jellies in passing at the London Aquarium, but I find these animals strangely beautiful and alien, and their lack of brain fascinates me. I hope that I will get more chances to interact with Moon Jellyfish in the future.