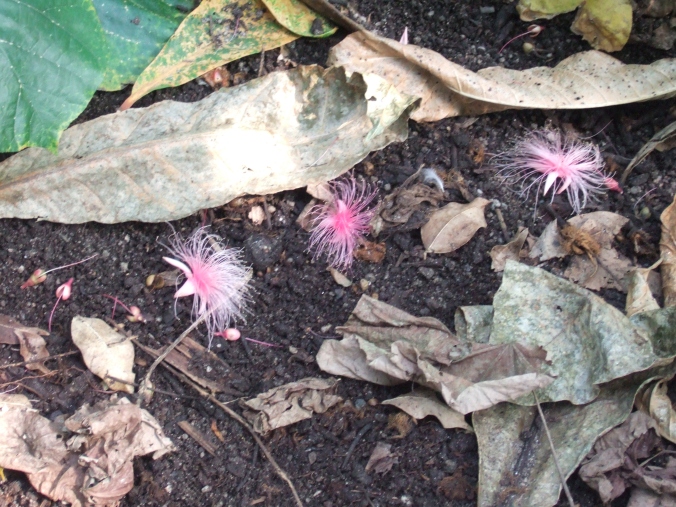 These beautiful pink flowers belong to a strange plant known as the Fish Poison Tree, or the Barringtonia Asiatica, which is native to the Philippines and other oceanic islands. It is particularly associated with a small Polynesian island, named Futuna after the native name for the plant futu. I saw on of these plants in bloom at the Eden project, where its fluffy pink-white flowers had just begun to drop off the tree. As its name suggests, every part of this tree is poisonous and although it is not poisonous enough to kill a human in small quantities, grinding the square fruits of the plant can produce a powder capable of stunning or killing fish. It was used by indigenous peoples in order to help feed their groups, although it is rarely used today.

These plants are easy to recognise, either by their cuboid fruit or the sweet smelling pom-pom like flowers. A fully grown tree will reach about 20 meters into the air, and has a large area of coverage from the branches, which causes it to be planted in some countries as shade and decoration. In India this tree is often used for such purposes. The fruit, which is sometimes called a Box Fruit on account of its shape, is light and buoyant, allowing it to float easily on water. In this way it disperses in the same way as the Sea Bean and the Coconut, floating across the ocean until it washes up on land suitable for it to grow. Like the coconut, the seeds in the fruit can remain dormant for nearly 15 years, waiting for the right moment to begin sprouting. This means that the plant is widely dispersed over any area that it is able to grow, and is often one of the first plants to arrive on newly formed islands.

The plant was certainly beautiful, if somewhat dangerous to eat, and its method of distributing seeds is interesting. In particular it reminds me of the Sea Bean Pod, which is one of my favourite plants for the same reasons. Now that I know what this plant is, perhaps I will recognise it next time I see one.